As I mentioned several blogs back, while creating Dragonfire we took to heart many comments from Crossfire players. And one of the bigger requests was “it needs more Missions (Adventures)!” The base Crossfire game only had three. We knew from the get go that we needed to go above that. Well above that. What’s more, we needed to ensure a good, steady supply of future adventures. 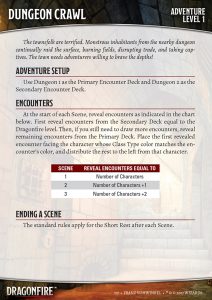 Now don’t get me wrong, the standard Dungeon Crawl is very enjoyable. Especially as you rotate through various Encounter Decks and your characters advance with abilities via Features and Magic Items. I’ve played well over fifty Dungeon Crawl games in the last six months, and I still would sit and play it at any time.

That being said, more Adventures is not only enjoyable, but is simply a must to ensure the type of re-playability we felt Dragonfire should have right in the box. With that in mind, there are seven Adventures in the base game, broken up across multiple Adventure Levels; i.e. difficulties of play. 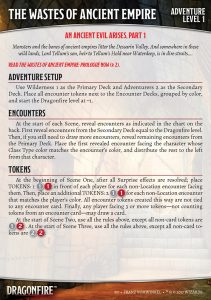 With the other five connected into a large-scale campaign called An Ancient Evil Arises: 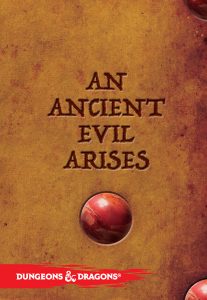 What’s more, we even have An Ancient Evil Arises Campaign Companion booklet. You read the fiction on page one, then you play the first Adventure, then you read the fiction on the next page, which moves the overall story forward. For example, if you look at the opening paragraph on The Wastes of Ancient Empire, you’ll note it places you in the Dessarin Valley—a hundred plus miles Northeast of Waterdeep—with ties back to that city. After the small intro, red text points you to the Companion. Then the fiction in the Companion fully fleshes that Adventure out: Why are you there? What do you find? What moves you onto the next Adventure? And so on.

What’s more, in future Adventures in that campaign, you will find text that stops you right in the middle of the game as opportunities are given in the booklet for you to take different paths. And how your party chooses will affect the outcome. Again, this is Dungeons & Dragons. And despite the myriad ways to now play in that universe, the beating heart of the experience is still the tabletop RPG. And we felt folding that experience into the campaign and providing choices to players—within the limitations a non-RPG game provides—was paramount.

Now let me be clear. You don’t have to play the campaign to play the Adventures. If you just want to play and experience an Adventure because it looks good, then simply ignore the red text on the cards and don’t open the booklet. Though your Party Level better be up to the Adventure Level, or you might be in for a very rude awakening as the game and its monsters hammer you hard. 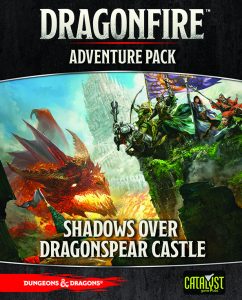 Remember I said there’d be ongoing support for the game? The first two Adventure Packs—Shadows Over Dragonspear Castle and Chaos in the Trollclaws—are already at the printer. Each will come with a fifty-five-card deck of thirty more encounters, nine magic Items, and twelve market cards, along with eighteen stickers, two Character screens, a rule sheet and of course, an all-important new Adventure. 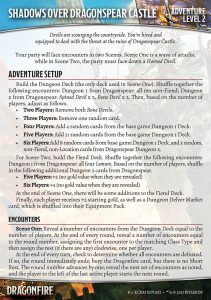 And the third Adventure Pack, Sea of Swords, is about to head to Wizards of the Coast for approval. In that Adventure, you’re on a ship, fighting boarding monsters and fending off an attacking pirate ship!

The flexibility of this game system for a myriad different Adventures is still wonderfully amazing. I’m just scratching the surface of the fun experiences you’ll be diving into in the next year and beyond!