Now in reality, that’s really only, say, 220 or so unique encounters, since every deck include multiples of the same card. For example, in the Dungeon 1 Deck from the base game, there are twenty cards, but three of them are repeats, meaning only seventeen unique ones.

But however you slice it, that’s a lot of encounters…and it only covers the first five months of releases! Ha!

So how do you keep such design work fresh and desirable for a community that will be diving into your game and playing it long-term? There’s a lot of factors to consider. (And while I’m discussing Dragonfire, this can apply to almost any game under the sun with a persistent release schedule.) 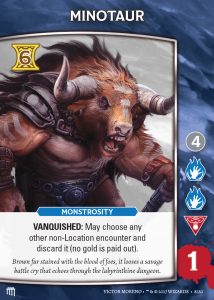 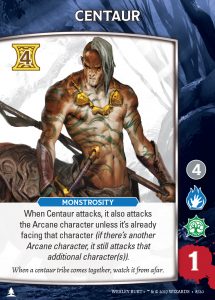 New Art
It’s a fascinating psychological truism that you can simply change the art on a card, with very few other tweaks, and it feels different. Now ultimately, I would consider that sort of development dishonest if it was done continually. But the strength of new art with a new name—even if nothing else really changes beyond slight tweaks to a damage track—is recognized and used adroitly in development all the time.

Take a look at the Minotaur and Centaur. They’re the same Arcane-type of encounter, and their damage tracks are very similar. Sure, there’s different abilities on each. But even if both of them had no abilities, with the different art and just small tweaks to the damage track (as noted below) the cards feel different.

Changing The Damage Track
This almost always occurs with the addition of new art, so it’s not often it is done by itself. But with five different elements to play with (i.e. the four colored damage icons and colorless), along with eight different levels on a card, the range is very extensive.

There are plenty of times, though, when I’ve deliberately mirrored some encounters in different encounter sets. For example, in Adventures: Sea of Swords, I introduced a Difficulty 2 encounter, Harpy Flock, with tokens. Then, in the first Campaign Box, I introduced a Difficulty 1 encounter, a solo Harpy. Since the two are nearly identical for the Creative, just one a flock of the other, the damage tracks are nearly identical.

In other instances, such as the current encounters I’m working on, I received permission from Wizards of the Coast to develop a few additional fomorians in the Creative for Fomorian encounters. While they don’t receive the nearly identical damage track as the Harpy variant situation above, they’re still all Fomorians, so I started with the basic Fomorian from the base game, and then tweaked adjustments to create the feel of the new encounter I was hoping for.

Elemental encounters, and their Myrmidon cousins, are another example of creatures that are very similar in overall potential—even if the subcomponents are unique—that they bear striking resemblance to each other, even if the exact colors are different. 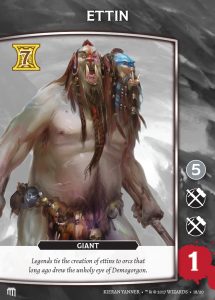 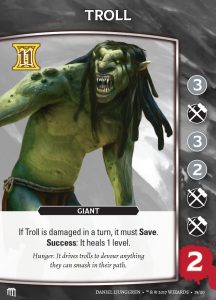 Then you’ve situations like the giant-type encounters, where each is pretty different from the rest, but at the same time almost all of them are Martial cards, giving them a connected relationship. The Ettin and Troll exemplify this; while both have fairly different damage tracks, it still all tends to have a similar vibe, hopefully creating that connection. (As a fun aside, the Ettin‘s damage track was originally slightly different, but we made the final decision of the colorless 5 followed by the two black as it helped to mirror the two heads…we really do try and weave in that Creative at every level.)

Pairing Up Existing Abilities in New Combinations
Hand-in-hand with the damage track manipulation is the tweaking of existing abilities:

All of those are a magnificent tool box that allows for an incredibly diverse set of encounters.

Introducing Brand New Abilities
While you always want to be careful how often you introduce brand new abilities, it’s going to happen. Especially when you’re trying to create a specific feel for a given set of cards. But of course, there’s myriad ways to do that.

The first and easiest is simply text directly on the card; i.e. it applies to that card only and isn’t a universal addition. This usually comes in two forms. 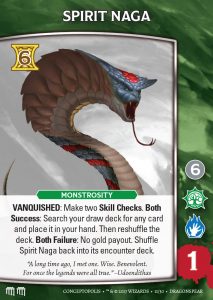 First, when you’re attempting to mimic the Creative of a given creature of the tabletop Monster Manual. For example, the Spirit Naga in Shadows Over Dragonspear Castle is generally a good creature, and you can walk away with cool stuff. But it often re-vivifies at a later time. 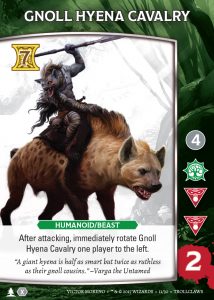 Second, when you’re attempting to create a new effect across multiple cards. A great example of that are the rules I introduced to cavalry for Chaos in the Trollclaws, and the unique Adventure I wanted to create for it. While the Gnoll Hyena Cavalry is a unique ability to that card, that basic ability is used across multiple cards to create a set that interacts in a given manner to achieve the feel of the Adventure over-all. (You’ll note a unique symbol on that card…I’ll dive into that explanation in a future post.) 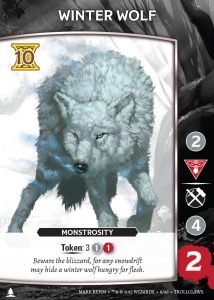 Then you have something completely new, but that will be universally applied. That’s actually not happening for the first few expansions, so I won’t dive into those details for a while.

Just as in my last post, I discussed that I’m just scratching the surface of all the different Adventures that can be created, despite that crazy amount of encounters coming, you’ll find fresh encounters and puzzles that’ll keep you excited and challenged for a long time to come.