We’re approaching the end of the process for designing encounters. But at this stage, we’re actually more focused on the encounter deck as a whole, not any individual card. Hopefully it’s already been made clear that the Encounter Decks are designed to work as a set. But more so than at any other stage, this is about setting the strength and cohesiveness of a deck for game play.

One of the ubiquitous movie scenes surrounding the forging of a blade is the quenching. When the blacksmith takes the heated blade and plunges it into liquid with a wonderfully satisfying spray of bubbles and erupting steam. Very evocative. More importantly, it’s a crucial element. A transformative moment for strengthening and hardening the blade.

Location encounters are that quenching process that most readily brings out the strength of a given Encounter Deck. That being said, I don’t believe there’s an element of Dragonfire that has caused more arguments and more contention. At the same time, even outside of the crucial design element that adds the hard into the puzzle that must be solved to win the game, they also bring a fantastic Creative aspect to any game table. After all, is there anything more quintessential to D&D—or almost any good story—than to separate the party or to place yet another obstacle in their path? The appearance of a Choke Point or Cursed Ground can throw all of your carefully laid plans out the window as the crucial Lightning Bolt you needed from the wizard or that Cure Wounds needed from the cleric are now off in a completely separate Location, away from the main party.

Location encounters are seeded into the deck; in the base box set, its usually two per deck. So as you’re revealing encounters throughout the game, you have no idea one is coming until its revealed and placed in front of a player. Once that Moaning Chamber is placed into play, you’re plunged off into another dangerous portion of the adventure. You’ll take your Class Type marker and move it from the Adventure Environment card (where all player markers start the game) onto your Location to visually show that you’re separated from the party. 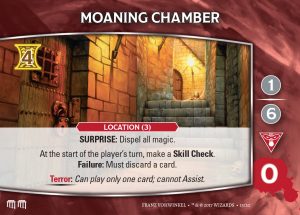 The reason this can be so dangerous and is one of the key difficult elements to the puzzle of any given game is now there’s several elements working against the party.

First, normally you can play the damage from your cards against any encounters on the table. It’s a cooperative game, after all. Now, however, you can only play Assists into or out of a Location. In other words, if you’re inside the Location, you can only damage other encounters with Assists. And if you’re not in that Location and are trying to damage it or an encounter inside it to help the separated player…once again, only an Assist will do the job. And Assists are not very plentiful.

Second, another player could jump in if they wish to help you; as noted above, if they’re in the Location with you, they can play cards against the encounters facing you as normal. However, several issues with that. Primarily, there are specific limitations to how many players can be in a Location at once. Cursed Ground is wide open. However, if you check out Choke Point, the number in parenthesis is that limitation, so in this case, only two players can be in that Location. And once a Location is in play, there must always be a player in it until it is defeated. So you can move out of a Location if you’re the Wizard with the lowest hit points. But someone always must be in that Location. So you have to take the initial hit, wait for someone to jump in the hole with you and then move out on your next turn. And speaking of that hit, you could be facing both a Location as well as several other non-Location encounters. And they’re all attacking every turn! 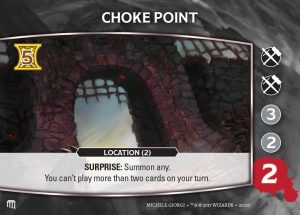 Third, even outside of those player limitations and the extra attacks, the Locations often bring extra intense rules you have to deal with. For example, that Cursed Ground forces you to discard two cards the moment it is revealed…which is pretty brutal. And then Choke Point does exactly that…chokes off your ability to play a larger number of cards, making it so much more difficult to defeat the Location. And then you’ve got the Moaning Chamber, which I’ve previously shown. It doesn’t damage you…but it can separate you for a round or three, which weakens the whole party.

(For those paying attention, you’ll notice that the last level of the Moaning Chamber changed from a colorless 1 to a Deception icon since I previously showcased the card. Loren, Jay, and I have spent many, many hours over the last three days carefully reviewing every last element, card and sticker of the game, making any last tweaks we feel are appropriate, and that was one of them. And in fact, they were here earlier in the day for another several hours to get through the last of the review.)

At this stage you might be asking yourself, “Why did that cause a lot of arguments? That all seems great!” Despite the relative ease of understanding it once you play it, it’s the initial understanding of the concept that has proven a beast to effectively communicate. I don’t believe any portion of the rules received more attention. I rewrote its presentation at least a half-dozen times, and then it was re-written by one editor and then re-written twice by another editor, simply trying to find the best, most concise way to present the rules. And because of that potential complexity, we wondered if we shouldn’t even include it in the base game, and push it to a future expansion instead.

Ultimately, we decided it was too important to both the Creative as well as the design we wished to present. As you dive into the game in a few months, even if you stumble a little through how Locations work, we hope you stick it out. It really is one of the best parts of the game. As with any good story, when one of your party is abruptly separated, you may think there is no hope. But you dig deeper, search more carefully, and fight harder and smarter, you’ll most often come out the other end with a victory. And it’s all the more powerfully sweet for that extra danger you faced and conquered.