Right about now, I thought I’d take another brief sidetrack away from encounters to discuss one of the single best aspects of Dragonfire: the Dragonfire Deck. (Utterly apropos, as it can so often turn encounter cards from manageable monsters into raging creatures of destruction.)

This deck represents the sound of orc drums in the cavern depths, the clatter of hoofs on cobblestone in pursuit, the spidery claws grasping at your cloak in the tangled wood. It is the driving pressure that keeps the game exciting and grows ever more dangerous the longer you take. At any moment, the orcs might appear, the horse might heave into view, or the claws might snap the cloak tight against your throat.

In terms of how this plays out at the table, once the game is set-up, the last thing you do before the first person (the Party leader) starts their turn is to reveal a Dragonfire card, read it aloud, and then place it on top of the Dragonfire Deck. 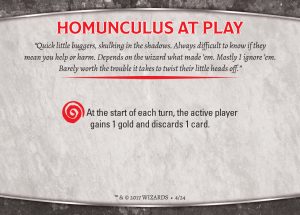 Each includes a bit of flavor text that helps to set the scene of what’s unfolding in that given round of the game. Then the rules text, as appropriate, is applied. Sometimes it can be rather innocuous, such as the Homunculus At Play. Sure, it can be annoying to discard a card, but you get a gold, so all things being equal, not a bad trade. 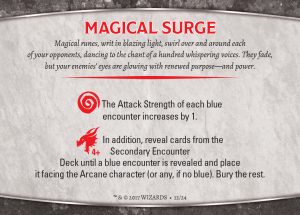 You can also have very situational Dragonfire cards, such as Magical Surge. If there happens to be no blue encounters active, and you’re below Dragonfire level 4, then no real worries. You’ve got a round without dealing with additional Dragonfire effects.

However, you have some cards that are always a pain and are a troll-kick-in-the teeth when they show up, such as A Master’s Hand. 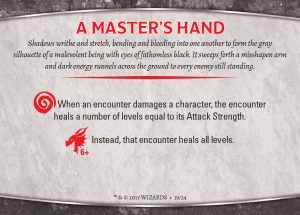 I’m sure you can see immediately what I’m referring to from the opening when I mention this is the pressure that keeps the sense of impending doom constantly at your throat and pushes you throughout the game. The longer you take to get through the Adventure, the more harrowing and difficult it becomes. Take too long and the dangers simply become so great that all your vaunted adventuring skills likely won’t save you. 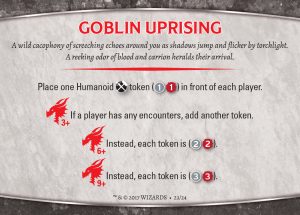 Goblin Uprising is probably one of the best examples of a Dragonfire card that can rotate from being annoying but fun (ish) at the low end to harrowingly deadly at the high end, depending upon when it shows up.

Now for those that played Shadowrun: Crossfire, we found that while it’s a keystone of the game, it can often be forgotten in the heat of battle as monsters are slain and loot is shared. Based upon player feedback from that game, as well as our playtesting and brainstorming for Dragonfire, we’ve come up with a series of great tricks that will be included directly in the rulebook. We’ve found if you incorporate these into your play, you never forget about the Dragonfire Deck or the active cards.