Saving Throws. Skill Checks. It would be hard to argue against the idea that these are as quintessential to D&D as fighters, clerics, dragons, and drow. In fact, if you remember the very first dev post, I discussed our lists of essential elements, and those were on most of them.

Yet two and a half months into the core design, neither one had appeared. This was absolutely one of those times when we couldn’t see the forest for the trees, and took a day or three to sit back, re-orient, and determine if the blade grinding was proceeding in the right direction.

And it was not.

After determining that Saving Throws and Skill Checks weren’t there and realizing they needed to be, it took a few days to figure out how to implement them. Loren sparked upon the idea of revealing the top card of the appropriate deck (more on this below). This led to many discussions about that probabilities of success vs. failure; should you replace/bury/discard the card; and even when you’re removing that perfect card you were waiting for, does it still feel satisfying, or just annoying; and so on. A lot of playtesting answered most of those questions.

There was also a question that arose related to the naming convention. Through the first half dozen drafts of the rules and playtesting, the term “Saving Throw” was kept. After all, that’s the D&D term we all know and love. However, as we started to expand playtesting boundaries, we started to receive feedback that it was actually creating a conceptual disconnect. Even for those without a deep knowledge of D&D, the “Throw” aspect simply brought visions of dice. As such, we finally made the call that you always have to make in such situations, and that is to harken to the aesthetics of this game, and modify it slightly from the original RPG source. Hence “Saving Throw” became: Save.

Ultimately, this all led to the same basic mechanic, with Skill Checks only ever applying to characters and Saves only ever applying to Encounters. In both instances, the mechanic plays as follows. First, remember that the entire game is color-coded to four colors: Arcane (blue), Deception (red), Devotion (green) and Martial (black). If you look through the previous blogs (especially Grinding The Blade), you’ll note that all of the encounters and cards fall into one of those four Class Type colors. Second, you reveal the top card of the appropriate deck: if it’s a Save, it’s against an encounter, and you reveal a card from its corresponding encounter deck; if it’s a Skill Check for you, you reveal the top card of your draw deck. If the revealed card’s color matches the color of the encounter—for Saves—or the Character screen—for characters, it’s a success. If it doesn’t, it’s a failure. In both instances the card is then buried to the bottom of its appropriate deck. 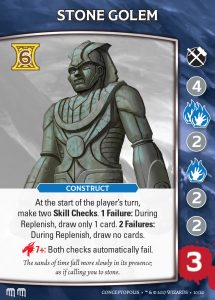 Let’s take a look at the two primary ways that Skill Checks occur: either a card requires you to do it, or you play a card that requests it.

For the first option, review the Stone Golem card, arguably the most dangerous card in the Dungeon Difficulty 2 Deck. You’ll note the card requires Skill Checks (in this case, two of them), and then defines what occurs under Failures (i.e. if the cards you reveal do not match your Character screen color (your Class Type)). 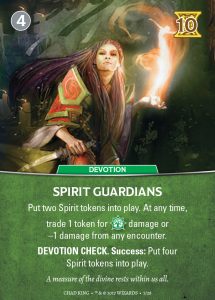 For the second option, take a look at Spirit Guardians. This is an instance where the player determines if they wish to make the check or not. Of course, since there is no downside here, there’s no reason not to. However, you’ll note that the card doesn’t say “Skill Check,” but instead says “Devotion Check.” Meaning to succeed at this check you must reveal a green (Devotion) card. Relatively easy for a Devotion character, but for anyone else, much more difficult. This Character Class specific rule takes this great mechanic and allows us to spiral down into targeted flavor depths for various cards. In this instance, this is absolutely a Devotion style of card, and so only a Devotion character should get the maximum effect. (Then again, I’ve seen a non-Devotion player snag the extra bonus…fate was simply kind that day.)

If the added mechanic wasn’t is enjoyable enough, an additional unintended consequence of this design is that the decks create their own proficiencies. By that I mean that in the D&D tabletop RPG, you often can do a lot of things outside of your Class, you’re just not proficient in them, and so it’s harder to achieve a success.

Because a deckbuilding games requires that most players are able to purchase most cards, there’s a slight disconnect built into the game from what you might expect coming from the RPG. (“What do you mean the wizard can buy the Tower Shield?!”) But by introducing Skill Checks, we’re able to temper that Design imperative with a Creative layer. Sure, you can buy off color as needed, but you’re decreasing your proficiencies; your ability to succeed at Skill Checks goes down as you buy off color. Now that seems a bad thing…and it can be. But Skill Checks are not made all the time, and there are great tactical reasons to buy off color (though some of you will quickly decide that your flavor of play means you never buy off color). Just know that like all great games, there’s a price to pay for all such decisions. 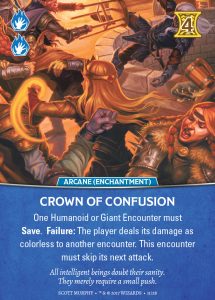 The other side of the Skill Check is the Save. Again, there’s multiple ways this can play out. The first are Market card abilities, such as the one for Crown of Confusion, which allow you to target encounters for great effects. Most of the time, an encounter will fail (roughly three out of four times)…but when it doesn’t, it’s a wonderful surprise you have to overcome. 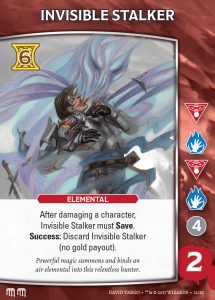 The other option is usually found directly on the encounter, and is often all about bringing the tabletop RPG flavor of a given monster into the game. For example, Invisible Stalker is a hunter/killer that’s summoned and launched at a target and when it’s done, it leaves. The card’s text mechanics embrace the Save as a way to imbue that flavor into the card, while simultaneously giving players those moments of “please go away, please go away!”

These two mechanics work hand in hand to bring some great D&D aspects to Dragonfire, while ensuring that they also spark tactical decisions for the players to embrace and explore as well.