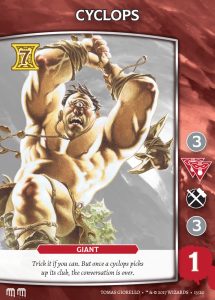 After a few important side trips, we’re back to discussing the development of the encounter cards.

With the overall shape locked in and graphics well underway, it was time to start grinding to really hone the final shape and start to bring out the shine of the blade.

I’ve mentioned (and shown) several new and/or tweaked elements that we’ve introduced in Dragonfire. There’s so many that I won’t be able to cover them all in a single post, but we’ll dive in and see how far I make it. 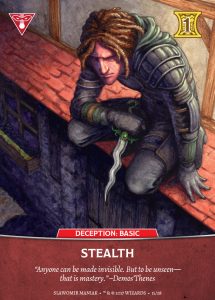 The first and easiest was something we attempted in Crossfire, but ultimately it didn’t come to fruition. And that was the idea of using double icons in a level. If you look at the Cyclops, you’ll see it has a double red (Deception) icon on the second level of its damage track. When applying damage to an encounter, you’re going to be playing various cards (like Stealth). And each of those cards will generate certain damage icons. In the instance of the Stealth card, it generates a red (Deception) icon. When you look at the Cyclops, you start at the top and you must apply enough damage, in the appropriate icons, to defeat that level in one turn. In this instance, any three colors. So playing just the Stealth won’t do anything. 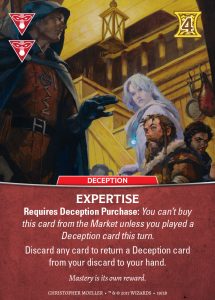 However, if I also played a Expertise, that would give me three total icons, which I could then apply to that colorless 3 on the top row of the Cyclops’ damage track to defeat that level (any of the colors can be applied to those type of damage track levels). (I would also choose whether to use Expertise‘ text ability, or not, at my discretion.) However, I then have a double red level on the next row, which means only two red (Deception) icons applied in the same turn can be used to defeat it. 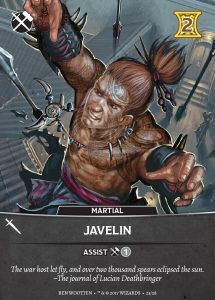 As such, if someone had an appropriate Assist card, which can be played by another player on my turn, then we can do some real damage. Let’s say another player had a Javelin. You’ll note the Javelin Assist ability generates a black (Martial) icon, as well as one colorless damage. So I can take both of those icons, along with my Stealth to generate three icons and defeat the first level, then apply the Expertise double red (Deception) icons to defeat the next level, leaving only two last levels to fully defeat the Cyclops!

Not every card has a double icon, but they serve the function of making it a little more difficult to defeat an encounter, while also first appearing in Difficulty 2 Decks. That provides further flavor and game-play, as well as letting you know you’re facing butcher monsters. (Yes, that means Difficulty 3 Decks will have encounters with three icons on a damage track level!)

Now that was a fun, but subtle tweak from the existing Crossfire engine. Now we’ll move to something completely new: the Tripwire Trait. This was actually an idea that Loren first put forth. I’d also been thinking along these lines, but hadn’t found the right implementation yet, so it was a perfect fit. 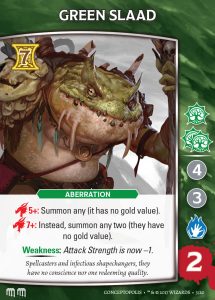 As you look through the Monster Manual, you see a wide variety of special traits that bring additional options and powers to a given monster. We try and emulate a hint of that through the various color icons along the damage track. And yes, there’s text effects on cards that bring that same unique feel to the game. However, the Tripwire Trait not only brings that additional Creative aspect—which is important—but also introduces tactical decisions in a far superior way than just a text effect.

Interestingly enough, the Tripwire Trait was one of the elements we argued about more than just about anything else. The main concern being its added complexity. And while it’s a great complexity, it’s still complexity. Should we hold off, and not include it in the base game, and make it an expansion instead? We went round and round on it, but ultimately decided it was simply too good to not have in the base game. As such, we made some good compromises in that it’s only on a certain selection of cards and doesn’t appear on any encounter in Dungeon Difficulty 1 Deck, which is what you’ll play through in your first quick-start game. In other words, you’ll have a game or three under your belt before you’ll run into this feature for the first time, making it easier to roll into your expanding Dragonfire knowledge.

Take a look at the three cards here with Tripwire Traits (white lines in their damage track that correspond to various keyword Tripwire Traits at the bottom of each card). In this instance, Weakness on the Green Slaad, Escape on the Green Hag, and Strength on the Banshee. 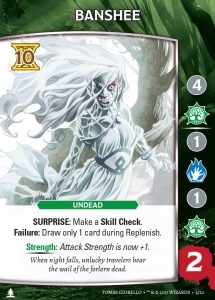 The rules for Tripwire is that if you damage a level below the white line, that ability is immediately activated (as appropriate for the type of ability and where you’re at in your turn). Which means the Banshee moves from an Attack Strength of 2 to 3, which is brutal. You then have Weakness on the Green Slaad, which is actually good for you. That usually means, tactically speaking, you want to hit the Green Slaad first and get him weakened; though the three green (Devotion) icons you have to get through can be tough. Whereas you usually want to hold off as long as you can before enraging the Banshee (especially as the track after the trait is relatively light, so if you can make it all in one go, you should try). Not that you always have a choice, mind you…sometimes you just have to get the damage going, and hope the player can take the hit for a round or two. 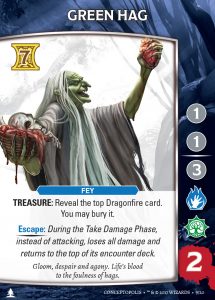 Then you’ve got the Escape on the Green Hag. If you defeat the Hag all in one go, once you’re past the line, she doesn’t Escape (that happens after the phase in which you deal damage). But if not, she’s going to lose all her damage and escape. Which can be super annoying. At the same time, it can be tactically advantageous. She hits pretty hard and if you really need to be dealing with other cards on the table, sometimes assigning just enough damage to make her go away is the right decision. Just last week we were playtesting an Adventure Level 5 game that included four Scenes of play (as opposed to the usual three Scenes), and the Green Hag showed up Scene one. And for the next three Scenes, though annoying, we simply found it better to make her go away and concentrate elsewhere. But she just kept popping up in the next Scene as soon as new encounter cards were revealed. We finally got her on the final Scene.

Of all the new additions to the game, the Tripwire Trait is one of our favorites for both the wonderful D&D flavor it brings to the table, as well as the great decisions player have to make to try and solve the puzzle to complete the Adventure.