Any game you work on is a labor of love. Even if you start out indifferent to it, if you’re going to put in the long hours and find the good creative spark to make a great game, you have to find that love for what you’re working on.

At the same time, you can’t lose sight of the fact that once you release the game, it’s no longer your baby. The community will take that hard-forged blade you spent countless hours beating into shape, and make it their own in whatever way they want. And that’s how it should be.

However, thanks to the nature of online communities, you can often get a good sense of what the community wants from your game well before it heads to print—and it may not be what you originally intended. Then you’re left with a decision of whether you should or shouldn’t listen to the community. I tend to side on ‘listen to the community’ whenever possible.

So when we released the first details surrounding Dragonfire, we immediately got a response we did not remotely expect: “We want 2-player!” And it wasn’t a little response, either; it was a significant one, entailing requests via emails, Facebook, Twitter and more.

The idea of the 2-player popped up on our radar early, but we had initially discarded it for several reasons.

Second, as previously mentioned, there had been so much call for Shadowrun: Crossfire to have a 5- and 6-player option, we knew Dragonfire must include that expanded play, and so all our time and efforts regarding the number of players were focused on the larger side.

Finally, the nature of the Crossfire engine means that more players in the game make it easier to play, and fewer players make it harder. Which means that the 2-player vs. 6-player concepts are diametrically opposed. While working on the one, it seemed unnecessary to work on the other.

However, the community let us know instantly—and loudly—that they wanted a different blade. And after a quick discussion, we realized that this isn’t just our love…this will hopefully be all your love as well. As such, we’ve spent the last month continuing to figure out how the 5- and 6-player will work while figuring out the 2-player aspect.

We easily playtested at least a dozen different ways to make all of that work, and it was messy. Very messy. Again, remember that these two player concepts are opposed to each other, so the various elements you try on one almost always break the other.

Additionally, it’s a matter of a design space. As you can see on the Character screen (prefinal) above, there are 4 stats that make up your character: starting hand, starting gold, starting HP, and your Equipment Pack (the icons indicate the combination of Basic Market cards that become your draw deck during the game). And the nuances between Character screens can be as simple as one or two subtle stat changes, as you can see below (again, pre-final screen).

That may not seem like much on the surface, but believe me, the changes make for very different play. And we already determined during the building of the character stats that pushing them too far outside their parameters breaks the game. So trying to add or subtract from each of those, based upon the number of players…yeah…we tried every iteration we could think of, and none of them worked well at all.

We also explored the idea of messing with the Dragonfire level based upon the number of players, as well as revealing additional encounters (the monster/NPC cards you need to defeat in a given Scene of an Adventure). Both of those had limited success, but brought other problems that made it messy. 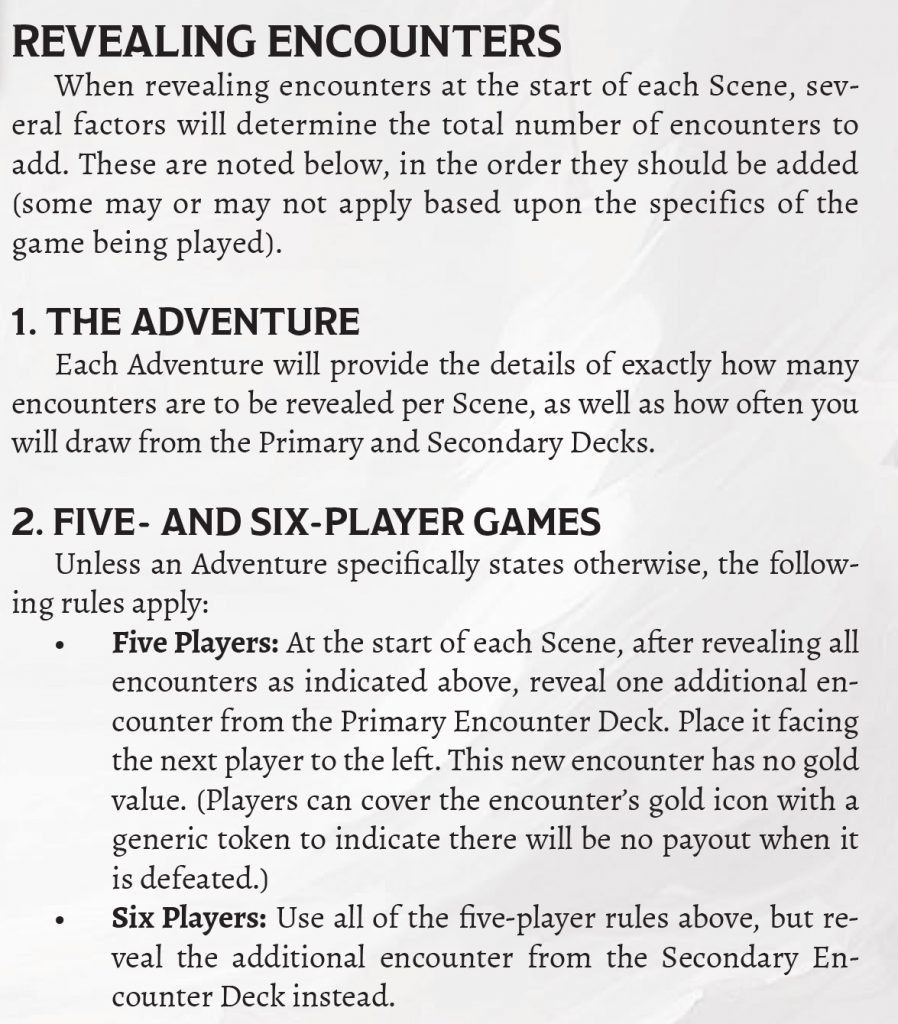 As universal rules, none of the above worked. What’s more, it felt completely wrong to tell a group of players that you can open your brand new game, grab your brand new Character screen, and then ignore the printed data on the screen for your starting hand/gold/HP, based upon the number of players.

We then started to break the concepts down into parts and apply them selectively. That started to gel well for the 5- and 6-player games, where the idea of adding additional encounters lead to the final, following rules at left (pre-final except from the rulebook):

As the top-end of the game solidified, that left the 2-player floundering. Until that wonderful epiphany moment. All of the Market cards in Dragonfire have their place, and can be pivotal during a game. But any card game has a few loadbearing cards, where the game would literally stop functioning well if they were removed. One of those is Bless. 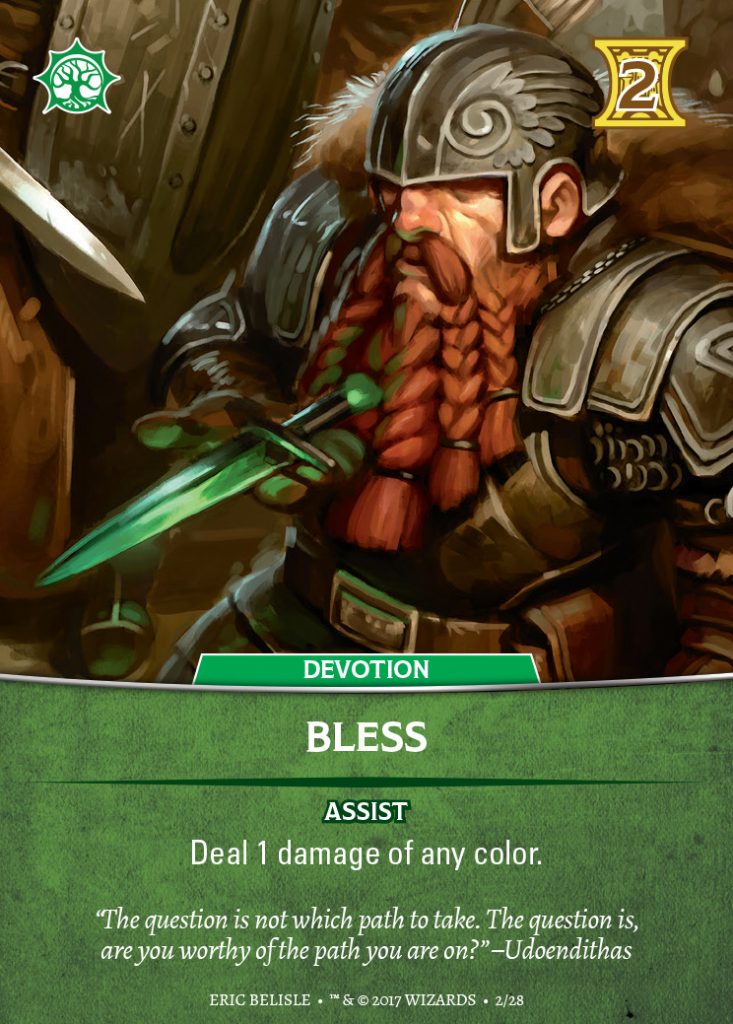 Many, many discussions revolved around whether Bless might be too good, but ultimately it’s a pillar of the game. And the epiphany came with the idea of substituting out a Basic Market card for a Bless for the 2-player game when building the Equipment Pack (thanks, Jay!). We immediately dove into playing it, and it instantly clicked with a rule we’d already implanted in lowering the Dragonfire level. In fact, it worked so well that we threw away some of the rules we’d developed for the 3-player and folded that into the same concept. Which lead to the following rule, below (again, pre-final excerpt from the rulebook):

Now I know what you might be thinking. “Wait, you said you didn’t like changing the printed stats for the number of players, but that’s exactly what you’re doing. Changing the Equipment Pack.” And you’re right. However, it felt good. Unlike the other stats, which are just values, and having to remember to add or subtract one from a number was often just annoying, adding in a more powerful card felt great. What’s more, as soon as you have even one game under your belt, you start to understand how the various colors work. And you immediately get a fun little build-your-deck decision to make before the game starts on which Basic card to trade out for the Bless, based upon which primary Class Types are represented (Arcane, Devotion, Deception, Martial), the Character screens you’ve selected (i.e. the Character Class and race), and so on. 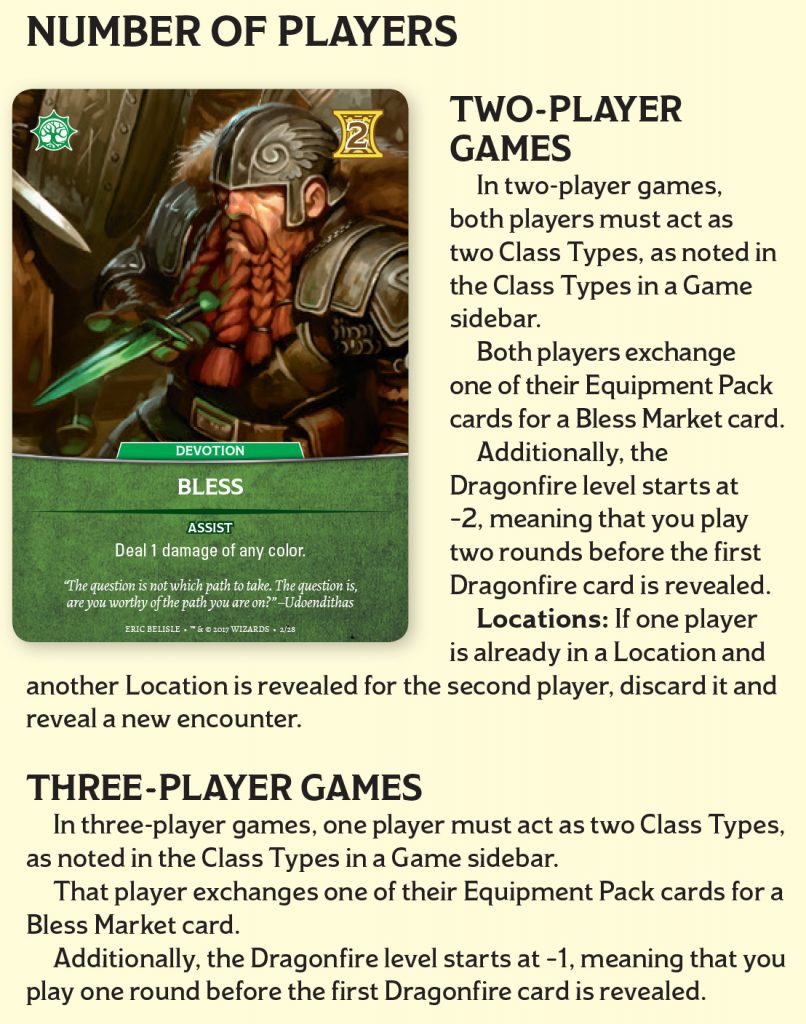 Ultimately that’s one of the most satisfying aspects of game design and development. When you’ve banged your head against the wall for a long time, and suddenly the solution appears and it not only works, it works very well. After we first decided to work on 2-player rules, I remember saying something akin to: “I’ll never play 2-player, but if others want it, then let’s figure it out.” Since then, I’ve played dozens of two-player games, including four of them last night at Adventure Levels 4 and 5 (will dive into what exactly that means in a future post) and each one was an absolute blast. As I said…it works, and it works very well.

We are, then, officially announcing that Dragonfire is a “2 to 6 player cooperative deckbuilding game.” (We’ve changed the website details to reflect that.) Thanks to you, the community, for letting us know the type of blade you want, and forcing us to re-think that part of the design. Dragonfire is far better and more versatile because of it!