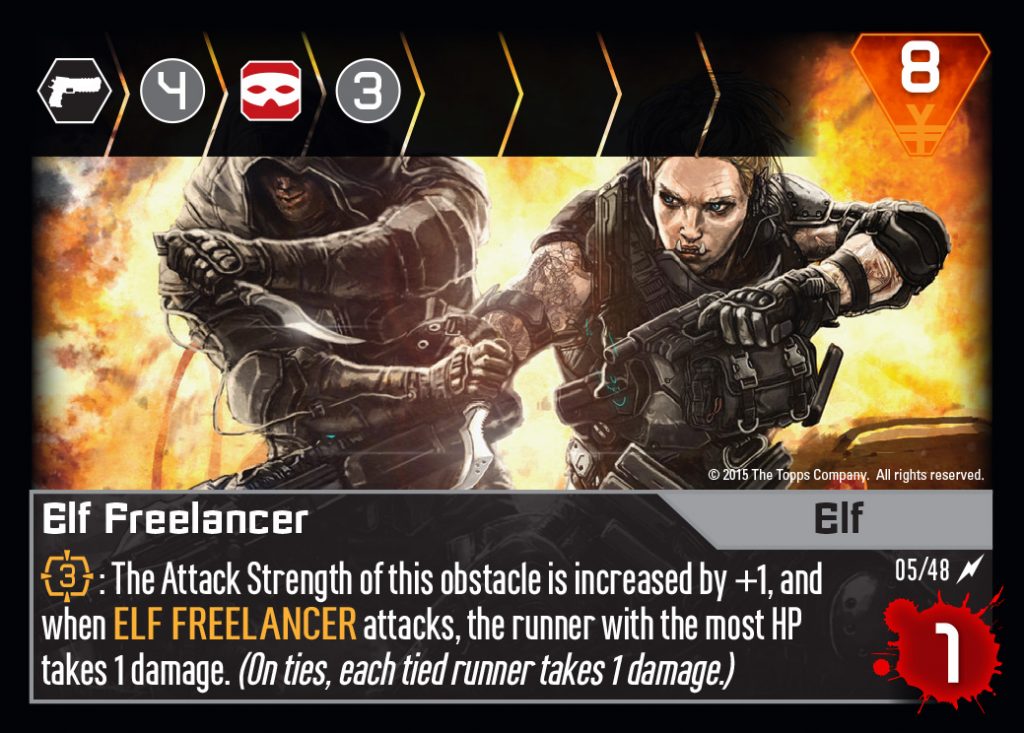 Since launching our countdown to the release of Dragonfire, we’ve had a lot of people asking about Shadowrun: Crossfire. That’s the original game where the Crossfire engine was first published. All of the dev blogs you’re reading are about how we’re taking that brilliant engine and modifying and/or expanding it to fit Dragonfire. So of course, our game couldn’t exist without that amazing original game design. 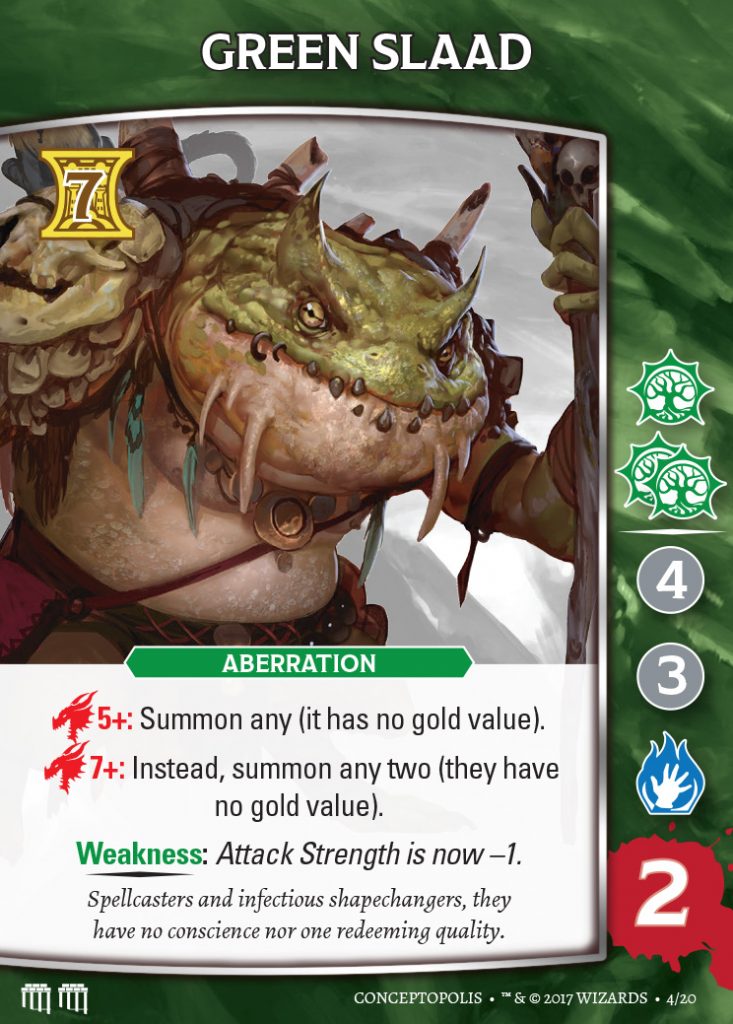 For example, take a look at the Shadowrun: Crossfire Elf Freelancer obstacle. Then compare that to the Dragonfire Green Slaad encounter. You’ll notice a ton of similarities, even if the graphics are completely re-worked. You’ll even notice that the Elf Freelancer has a Crossfire level effect (the 3 in the crosshairs) and the Green Slaad also has two Dragonfire level effects (the 5+ and 7+ with the dragonhead). All very similar. However, on the Green Slaad you’ll notice several elements not found on the Elf Freelancer (nor anywhere in Shadowrun: Crossfire); new mechanics we’ve introduced that help to make the game fresh and distinct. The first is the double green icon along the right-side damage track. The second is the Summon ability. Finally, the Tripwire Trait; the Weakness keyword at the bottom of the card, and the corresponding white line in the damage track. Just three highlights of the many tweaks and additions in Dragonfire. (As previously mentioned, I’ll dive into the specifics of the Tripwire Trait in future posts.)

With all of that in mind, I thought I’d shine a light on the luminaries involved in creating it, and their amazing breadth of work that covers almost every aspect of our hobby.

Gregory Marques
Gregory brings his experience as a game designer and product developer to every new project with a fiery passion. Before taking on the role of lead game designer on Shadowrun: Crossfire, Gregory was the lead designer and lead writer for the critically acclaimed Facebook game Dungeons and Dragons: Tiny Adventures and a designer on multiple expansions to Magic: The Gathering, Duel Masters, and Heralds of Chaos. Currently, Gregory is Lead Systems Designer at Amazon Game Studios.

Michael Elliott
Mike Elliott is a veteran game designer with over 20 years experience in the field. He started his career at Wizards of the Coast, where he worked doing design and development on about 30 Magic: The Gathering expansions and worked on numerous other game lines, including the mega-hit Pokémon trading card game. Mike later worked at WizKids Games as senior designer, and worked on a number of popular miniatures product lines.

He now has his own design company, which has done design and consulting work for companies including Hasbro, Activision, Topps, and Bandai, among others. In addition to doing design work for existing brands such as Magic: The Gathering and HeroClix, Mike has had over 50 of his own game designs published. He has done extensive work in the trading card game field, with around 20 published trading card games. Two of his original designs, Duel Masters and Battle Spirits, are among the bestselling trading card games in the Japan market. Mike also designed the Cardjitsu game for the Disney Club Penguin website.

Mike has published patents for toys and casino games, and has worked in the areas of trading card games, computer games, miniatures games, and board games. Some of Mike’s published products include the Thunderstone, Quarriors, and Dice Masters game lines.

Rob Heinsoo
Rob Heinsoo designs games. Having created dozens of role-playing games, card games, miniatures games and board games, he led the design of the fourth edition of Dungeons & Dragons, and wrote or led the design of many 4e D&D sourcebooks. Along with Jonathan Tweet, Rob is the co-designer and current Line Editor of the ENnie award winning RPG 13th Age from Pelgrane Press.

James “Jim” Lin
James Lin worked at Wizards of the Coast from 1993-2002. He was one of the initial designers working with Richard Garfield on the creation of Magic: The Gathering, and was involved in design and development of all Magic: The Gathering sets through Alliances. Starting in 1995, he led design and development efforts at Wizards for all trading card games other than Magic. In this role, he served on an advisory council guiding product launches and strategies, and played a key role in developing Wizards’ strategy for its launch of the Pokémon trading card game. Starting in 1999, James became the Senior VP of R&D at Wizards with responsibility for design and development work on all Wizards’ products, and served on an advisory council guiding all product strategies and launches within WOTC.

Most recently, Rob has been working on Plants vs. Zombies: Heroes.

Sean McCarthy
After graduating early from the University of Washington Computer Science program, Sean was immediately hired by Google. He learned everything there was to learn there, then set out on an adventure to make games. Shadowrun: Crossfire was his first major title, currently Sean is a game designer with PopCap Games on Plants vs. Zombies: Heroes.

Cal Moore
Cal worked at Wizards of the Coast from 2000–2011 as a technical editor and writer. While there, he worked on TCGs like Duelmasters, the Showdown Sports line, GI Joe, Kids Next Door, Xiaolin Showdown, Maplestory, and Uzumajin, RPG products for D&D 4th Edition like The Plane Above, Monster Vault: Nentir Vale, Mordenkainen’s Magnificent Emporium, Tomb of Horrors, and Gamma World, and other games like Dreamblade, Axis & Allies Miniatures, Axis & Allies, Risk Godstorm, Castle Ravenloft, and many more.

Jay Schneider
Professional chess player, wearable computing researcher, soldier, EMT, CEO, Jay has spent his life as he was destined to live it…going in several directions at once. Games have been a unifying thread throughout his life, and he’s best known as the designer of the mana curve and the Sligh deck for Magic: The Gathering.

Jay’s top credit is as a designer and game producer of Magic: The Gathering: Duels of the Planeswalkers. Other major credits include executive producer of the 13th Age RPG line and game producer for Heralds of Chaos. Currently Jay is Operations Manager for Fire Opal Media and teaches Game Design at the University of Washington.

Jay was the design producer on Shadowrun: Crossfire and is the design consultant for Dragonfire.