I mentioned in my previous post about “deck curves.” And that ultimately I rushed too quickly into the initial design, which meant I had to throw almost everything out and restart. (And that was after building materials and playtesting several times.)

When I say a curve, I’m referring to several things as they apply to an encounter deck:

Each of the Encounter Decks in Dragonfire contains twenty cards. So what do the curves of numbers for each of the data points above look like as they are applied across twenty cards?

Let’s just take one example: the total hit points on a Difficulty 2 Rating Deck. And by this, I mean how much damage must be dealt (regardless of color) to defeat an encounter. My initial build used the following: 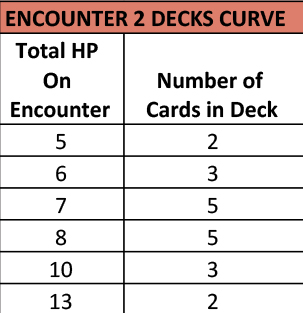 This means that two cards have five hit points on them, three cards have six hit points, and so on. Now, there were numerous fundamental problems that arose in this build. In no particular order:

Instead of thoroughly discussing what we wanted the Dragonfire curves to be, I just started out by mirroring the curves in Shadowrun: Crossfire. But those were built with forty card decks in mind, and built with the Shadowrun Creative in mind as well; in other words, constructed so as to evoke the particular elements of that universe that make it cool and unique. After some initial playtests, we realized it wasn’t feeling right, and the biggest reason is that we hadn’t built it to evoke D&D.

The next misstep was more production-oriented. I’d originally imagined that we’d have ten different levels of progressively more difficult decks. And because my game designer hat was more firmly on than my production hat at the time, I didn’t really think through the issues that would arise. Namely, we couldn’t possibly produce enough cards and have enough releases to cover such detailed differentiation. After kicking it around some more, we realized that four progressively more difficult decks would cover ten levels of player experience very well. This would provide a good balance between what players will need and want, and what the game and production can support.

The final misstep came directly out of the previous mistakes (as they always do). While we don’t directly use the Challenge Rating from the tabletop RPG, it informs the selection of monsters that we apply to a given encounter deck. Under the initial idea that we’d have ten levels of encounter decks, I built the Creative—the particular monsters that would appear on each card—so that sixteen of the twenty encounters were Challenge 1, while four of them (the hardest to deal with in that deck) were Challenge 2. Then, per the spreadsheet from the previous post, I filled everything in and fully built playtest materials. Such work ultimately left the gibbering mouther as the hardest card of the Dungeon Difficulty 1 Deck. 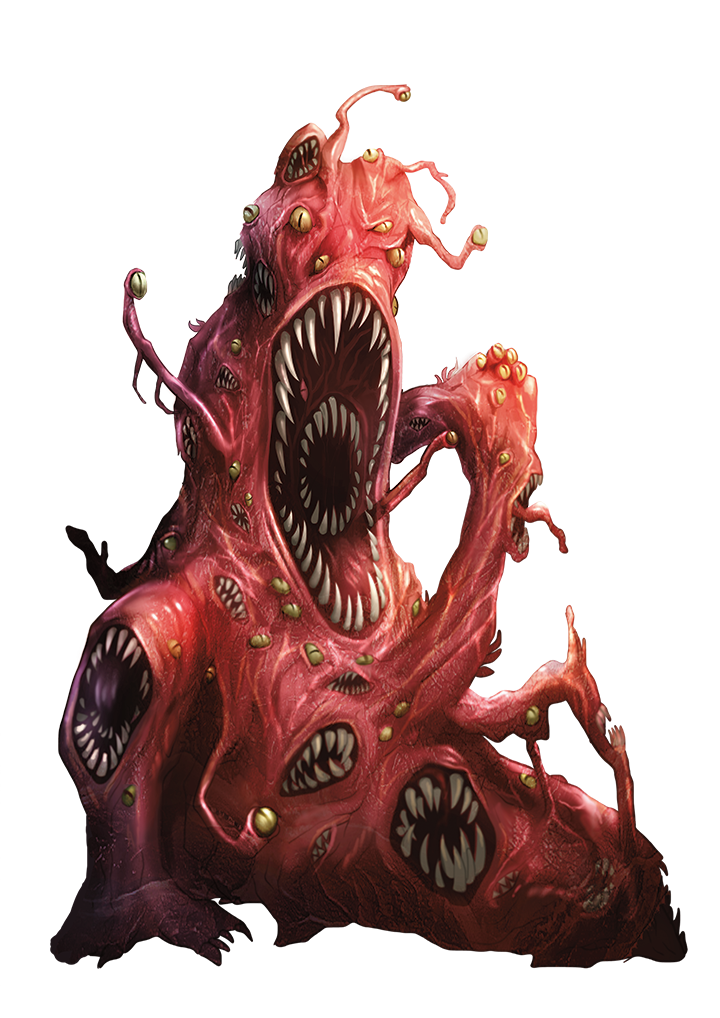 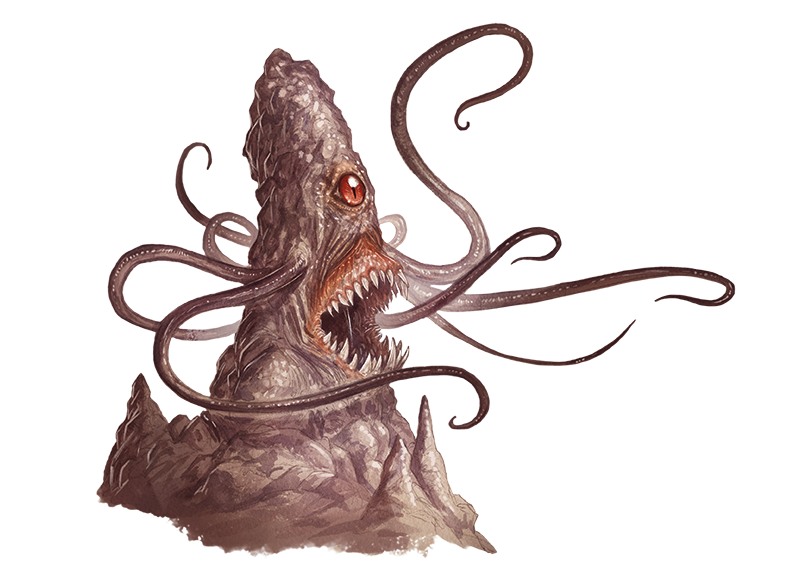 After several weeks of going down wrong tracks—which, in many ways, was still a good thing, as it really let us know where the new focus must be—we addressed all of the issues above. In doing so, we arrived at all new curves of data. For example, now the hit points on an Encounter Difficulty 2 deck look like the following: 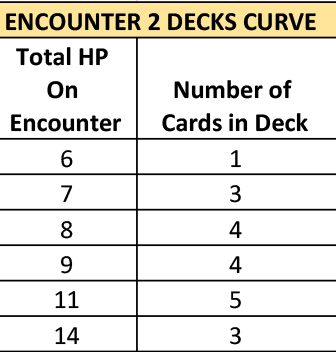 Now, to be clear, even though those work 95% of the time, a lot of playtesting fine-tuned several of those elements. So while one tab of the master monster google sheet includes the data for the deck curves, if you compare those curves directly to the final encounter decks tab, you’ll notice small variations here and there. No amount of math and data crunching on a sheet will ever replace the need for just endlessly banging on a game at the table and adjusting appropriately due to such playtesting.

In the next post, I’ll dive into playtesting itself, and how that evolved the encounter design.