As I delve deeper into the design and creation of Dragonfire, you’re going to see this phrase—“I’ll talk about that in future posts.”—a lot, so I’ll apologize in advance. But when designing a game, particularly one as complex as this one, there are so many interwoven elements that you simply can’t discuss them all at once. Well, I could…but then this blog would be a novella…at least. As such, you’ll see several instances of having to refer to a design element, rule, or feature in a future post. It’s simply the nature of giving you such an in-depth behind-the-scenes look at the entire process.

Right from the start, I knew we’d be making a key departure from Shadowrun: Crossfire. In that game, there are two obstacle decks (encounters), one hard and one easy. And they’re filled with every type of strange obstacle you might encounter in Shadowrun. Because in Shadowrun, well, you can run into almost anything, almost anywhere.

But it doesn’t work that way in Dungeons & Dragons. You’re never going to run into a roper in a city. Or a dryad in a dungeon. Well, let me rephrase that. Sure, a dungeonmaster could make that happen. But it’s going to raise player eyebrows unless there’s a great story behind it. Which there might be. But we don’t have that luxury in a card game. So when a particular monster shows up, it had better appear within an appropriate environment.

A second angle that comes from the Dungeons & Dragons universe is the idea of moving through those various iconic locales. In Shadowrun: Crossfire, there’s generally a sense that you’re in a future megasprawl city and that’s it. And that’s perfect for that setting. But for D&D, you need to feel like you can play games in various locations. From Baldur’s Gate to the Trollclaws to the Sea of Swords to The Spine of the World. These are rich, varied environments, and conveying that through the encounters you face fully embraces that aesthetic. 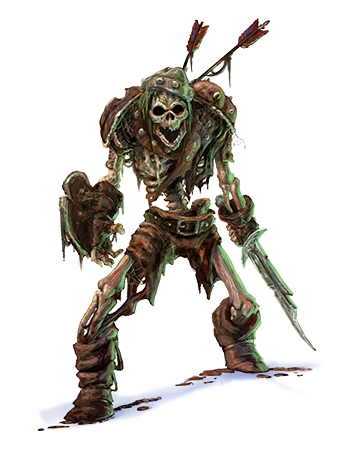 With all of that in mind, we knew the encounters cards would be broken into various sets: Dungeon, Wilderness, City, and so on. To facilitate that building, I took the tables in the back of the Dungeon Master’s Guide and typed them into a spreadsheet for ease of review and manipulation. While a lot of front end work, it would make all the subsequent work much easier as we decided on a locale for an encounter deck—say, Wilderness—and then select an appropriate environment—say, Forest—and start building the encounter deck.

Once that was done, it was time to start building a full spreadsheet and then filling it in. Below you’ll see the first line in a spreadsheet—broken up into bite sizes to make it digestible in this format—that now contains data for over a hundred cards. Skeletons, of course, seemed the most obvious place to start when building our first Dungeon Deck.

Most of the data above should be pretty self-explanatory, with a few caveats. First, while the D&D Challenge Rating has no direct impact within Dragonfire, it’s still very useful when selecting and translating various monsters to ensure they retain a respective degree of difficulty to each other and the party, based upon that rating.

For the card color, remember that all of Dragonfire is color-coded to four colors. So the capital letters applies to the card color and damage track, while the secondary color applies to what will also appear on the damage track. In this case, creatively, Devotion and Arcane felt most appropriate for Swarming Skeletons.

Finally, yes, there are Location Encounter cards in Dragonfire; I’ll touch on them in the future.

The skeleton ended up being one of the easiest Dungeon Deck encounters—there has to be an easiest—and so it only has two points on the Damage Track (G = green, U = blue (because B = black)).

Additional Differentiation applies to the concept that even after creating the various Hit Point curves for a deck, you need more variety. So there is a specific number of Very Bad, Bad, Neutral, Good and Very Good cards. In this instance, a Swarming Skeleton is a neutral.

The Trait icon is a brand new element for Dragonfire, and I’ll also cover that in a future post.

A whole slew of different text rules can be found in this column of the spreadsheet, including no text rules at all on a card. In this instance, tokens are a brand-new mechanic for Dragonfire.

While playtesting the first few builds of the game, we realized that a key flavor of D&D was missing (if you recall, I discussed those lists of key aesthetics last week): the idea of swarming monsters. Dragonfire is a deckbuilding game, so it already has a huge number of cards. And even with that, we were still lacking that feeling of swarming monsters. So we came up with the idea of tokens—punch-out playing pieces you can place next to the card—as a way to bring that all-important element into play. It’s one of my favorite new elements we introduced. It not only plays wonderfully at the table, but it provides a lot of Creative/Design space as well. (The 6+ and 8+ refer to the Dragonfire level; I’ll touch on that in future posts.)

Next is flavor text. Gotta have a quick dash of flavor for some nice immersion. Not surprisingly, there were several good discussions over the tone and direction of each flavor text. I won some, I lost some, just like any work amongst a group of creatives.

Now someone has to dig the specific illustration file name out of the D&D archive. And it’s a BIG archive. Never have I been so appreciative of a Mac’s robust previewing option to simply scroll through hundreds of large files to find what I need without actually opening anything. And that work is crucial in making layout flowing quicker. Finally, at a great suggestion from WotC, we’re including the artist’s name on every card.

Rinse and repeat…over a hundred times, just for the encounters in the base box. And of course, significant playtesting and discussions resulted in the spreadsheet being re-built and re-tweaked dozens of times.

In my entry, I’ll discuss how, despite all of the pre-meetings we had, I still managed to move a little too fast in building the encounter decks data, and ultimately had to rebuild almost the entire sheet—not including those playtesting tweaks noted above—to better address the appropriate design curves (and the subsequent re-figuring of the creative aspect that went along with it).