I hope you’ve been enjoying the Moonshae: Storms Campaign Box. Because it’s time for a jaunt in the mysterious deserts of the deep south…welcome to Corruption in Calimshan! 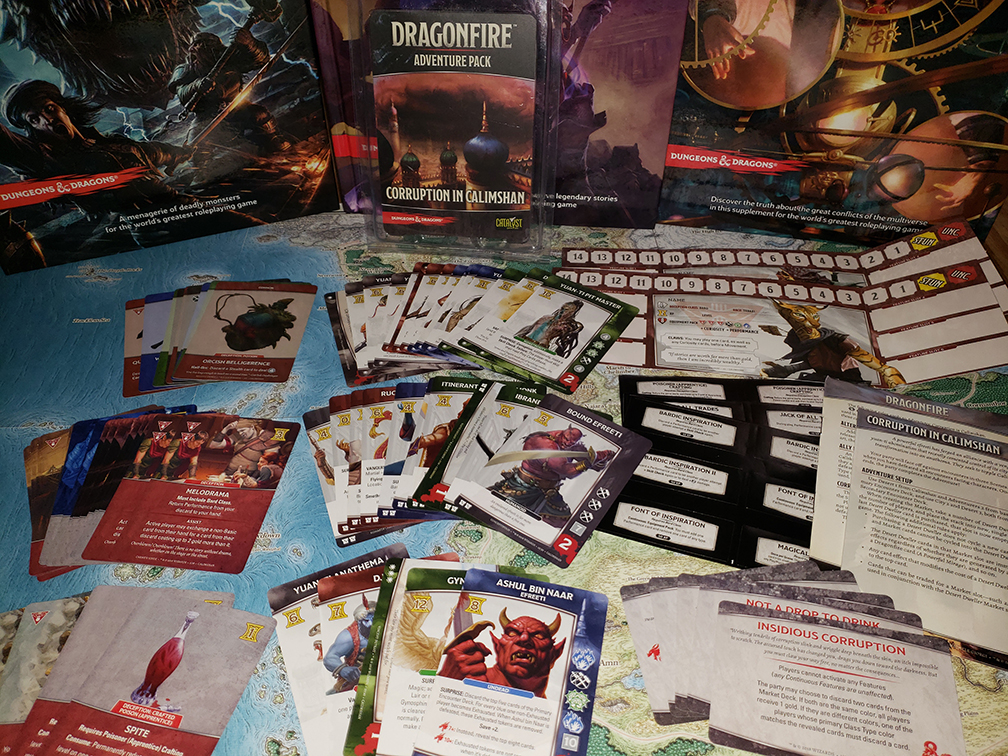 The contents of Calimshan include:

A powerful efreeti has forged an alliance with a vengeful yuan-ti abomination that recently cemented control of its city as it enacted a transformation into an anathema. They seek to topple Calimshan itself!

There’s so much action here, including numerous brand-new elements that make this Adventure Pack unique. 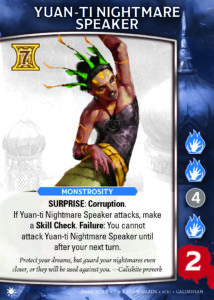 Encounters: Mummies, Jackalwere, Thri-kreen, Dust Mephits. All are new encounters you’ll be facing. There’s even five new Difficulty 3 encounters, including a Gynosphinx and its lair, a Djinni, and more. 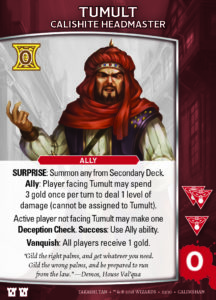 But the stars of Calimshan are the Yuan-ti. The Yuan-ti Nightmare Speaker is a great encapsulation of that challenge, bringing a new keyword rule to this Adventure: Corruption. When an encounter with Corruption first faces you, you place a clip on your highest XP Feature, which then cannot be used until all Corruption encounters facing the party are defeated!

As if that wasn’t great enough, we also introduce a new type of encounter, an Ally. The Ally is there to help you through the intricacies of a given Adventure. In this case, Tumult–who players were introduced to via the fiction in the An Ancient Evil Arises Campaign Companion–arrives to bring aid. Yet he’s still an encounter, so you must defeat him to end a Scene. (Calimshan only includes one Ally, but future expansions will delve into this new type of play more thoroughly.) 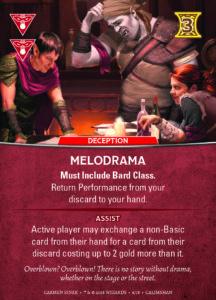 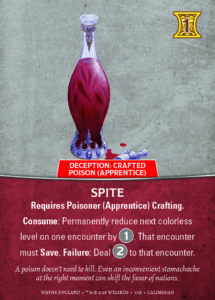 Market Cards: As usual, this Pack has a card unique to that Adventure, in this case Desert Dweller. We also include a new Bard card, Melodrama, as well as the usual alternate art for a basic card, Stealth.

Because this Pack isn’t already filled with enough new awesome, we then roll out two additional brand new items.

Then, we introduce Crafted Poisons–Spite–and a brand new style of play involving Features, with Poisoner Crafting. (Note these are not Magic Item cards, but something new and different.)

Stickers: Two sheets of stickers provide additional copies of the most important Features for your Bard.

Magic Items: A few repeats continue building up a robust catalog of Magic Items, while introducing a few new ones, such as the Quaal’s Feather Token: Whip. 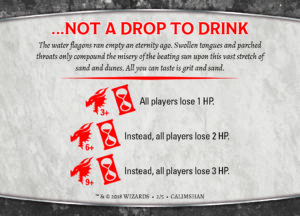 Dragonfire Cards: I’ve mentioned often that Dragonfire cards are so much fun to create and then watch how players deal with the pain and insanity.

And without a doubt, two of the Dragonfire cards in here–Not A Drop To Drink and A Terrible Storm–are arguably two of the most vicious we’ve ever published. Apropos for the terrible wastes of this far-off land.

Character Screens: The two new Character screens for Calimshan are a Dragonborn Bard and the afore-mentioned Tabaxi Bard.

Adventure and Rulesheet: As always, each Adventure Pack includes a brand-new Adventure to take full advantage of the Pack’s contents, while the Rulesheet provides additional clarifications and new fiction.

Don’t forget, visit your local game store tomorrow and pick up your pack!