We at Catalyst are often audacious. After all, we’re huge geeks and gamers. And we want all the awesomesauce we can cram into every game we make, along with that extra cool vacuum tray (for some of us, that’s fantastic as well!), the unique game clip or die, and the kitchen sink (or in this case, a bag of holding). 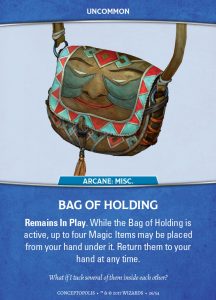 Now that attitude can (and has in the past) get us into trouble. And it certainly made the development of Dragonfire even more complex and fraught with issues that turned into a lot of eighteen-hour days over the last few months. However, how could we publish a Dungeons & Dragons deckbuilder and not have Magic Items? And more importantly, not have them be something really different and special. Not only in how you use them, but even in how you acquire them. 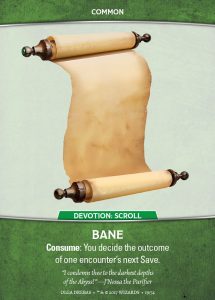 After all, unless your Dungeon Master is exceptionally kind (and if so, introduce us…I’ve never met one yet), you don’t just wander into the first room of a dungeon and discover a Mace of Smiting leaning in the corner. No, that’s for at least the second to last, if not the last big boss in the dungeon that pushes you to the edge of your limits, and only after you defeat him do you get to walk away with that cool rare magic item.

So we can’t just hand them out willy-nilly. Not to mention you have such a wide variety of items, including a lot of consumables like scrolls and potions. How do you take that into consideration in a deckbuilder? And finally, we have an exceptionally well-working game engine that was already stressed significantly to increase the depth of how Features (the stickers from the previous blog post) worked. How do you mesh Magic Items into it without destroying the game? 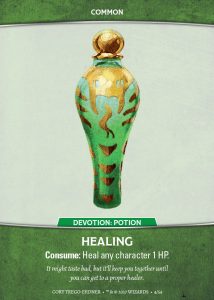 And let me tell you, while some of the Feature work we did made the game wobble pretty badly before we corrected, the various iterations of the Magic Items absolutely broke the game several times. There were just so many moving parts, and trying to weave in such a new element proved very difficult. But at the end, I believe we hit all of the aspects we were striving for.

Here’s a highlight of those and how they all interact (it’s a lot of over-lapping bits, so breaking them out with headers to hopefully make it all easier to follow). 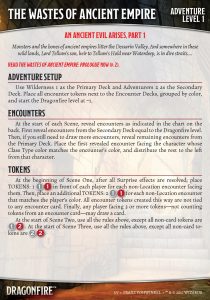 Earning Magic Items
First, you only earn a Magic Item if you complete an Adventure (like, say, the first one here that’s part of the linked campaign in the box). Remember from the last post about Features that you get XP for every Scene you start. Which means even when you lose an Adventure, you’re building up the necessary XP to spend on more powerful Features, to then go up against that Adventure again and ultimately defeat it. Not so with Magic Items. They’re simply harder to acquire. Only once you’ve completed the Adventure will you find the Magic Items.

Yup, that’s right. Random. After all, you have no idea what the troll, or owlbear, or even dragon has in its hoard. And they definitely don’t carry a neat little inventory list you can check, either. Instead, Magic Items are randomly dealt out face down, and once all players have them, you reveal them and determine if you can use them. And anyone who’s played the tabletop RPG knows that’s reflected in a whole series of progressively more fantastic and powerful Magic Item Tables in the Dungeon Master’s Guide book. Ah, so much fun rolling those items up to dangle in front of my players. And we’ve embraced that exact same aesthetic for Dragonfire.

Attuning
“What, I can’t just use the item if I receive it?” Nope. There’s several limitations you need to take into consideration. 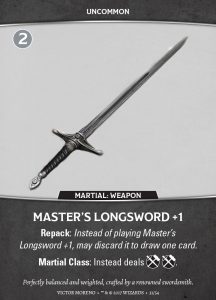 The first is attuning. A player can only attune to a number of Magic Items based upon their Character Level. (Ah, I know some of you have been wondering how important Character Levels will be…and Magic Items are the king element woven into that part of game play.) After all, you’re just starting out as heroes, and don’t know how to harness such vast magical energies as later items will bring to bear.

For example, at Character Level 1 a player can attune up to two Uncommon Items.

Rarities
“Wait. You mentioned Common items above, but your attunement doesn’t apply to Commons?” Correct. You can have as many Common items as you can earn. However, just because you can add an item into your deck doesn’t mean you should. I’ll discuss that issue in a whole future blog.

In the base game there are Commons, Uncommons, Rares, and Very Rares. And attunement only applies to anything higher than a Common item. Above you’ve seen two Common cards and now three Uncommons in the Bag of Holding, Summoning Gem, and Master’s Longsword +1.

In the base game there’s a total of twenty Common, twenty-four Uncommon, eight Rare, and two Very Rare Magic Items. Note that is total cards; a fair number of repeats in there, especially among the Commons, to ensure some of the more usable items, like those Healing potions, are available to multiple players.

So as mentioned, once you complete an Adventure, based upon the Level you played and your Character Level, you’ll grab the appropriate rarity deck, shuffle, and deal out some Magic Items.

Magic Item Limitations
Another factor you must take into consideration is the Magic Item Limitations, which are found on the back of every Character screen. For example, on the back of the Half-Orc Fighter screen, that character can have any four weapons, any one armor, any one shield, and up to three miscellaneous items. For the Sun Elf Wizard, however, while that character may have any two weapons, the single armor the character can use must be Arcane; meanwhile no shields can be used at all, but six miscellaneous items can be used.

How does this work hand-in-hand with the attune rules? Well, let’s take a look again at that Sun Elf Wizard. And let’s say he’s at Character Level 3 and he’s completed two Adventures at that level and happened to receive that Summoning Gem and Master’s Longsword +1 already (both of which he can use due to the Magic Item Limitations as well as attunement limits). 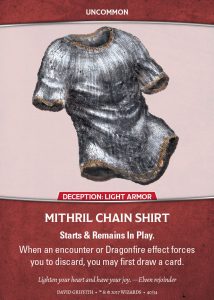 Now let’s say they play one more game and the player receives the Mithril Chain Shirt after completing an Adventure. The player couldn’t keep that Magic Item for two reasons. First, he currently can only attune to two Uncommon Magic Items. So if they could keep the card, they would need to trade in either the Summoning Gem or Master’s Longsword +1 to make sure they’re not exceeding that attunement limit.

In this case, however, the Wizard Class due to its Magic Item Limitations cannot have Armor unless it’s Arcane Class. So the Mithril Chain Shirt simply cannot be used by the Wizard.

But What if I Don’t Like or Can’t Use My Items?
In the case above, the Wizard couldn’t use the Mithril Chain Shirt. Additionally, there’s a chance that depending upon the player, they may not have even wanted the Master’s Longsword +1; i.e. it has a Martial ability the player cannot use.

In both instances, the first plan is to see if anyone around the table is willing to trade. Even during playtesting we had some pretty heavy trades going on for Magic Items, with the Rogue pushing extra hard for concessions to give up a card he patently couldn’t use. He couldn’t help himself…Rogues….

The second option, for say the Master’s Longsword +1, is simply to write on the back of your Character screen in dry erase that you have access to that item, but don’t currently put it into your Equipment Pack in a game. Then, if an opportunity presents itself down the line when you might use it, then you pull it out for that game. For example, while this wouldn’t work for the Wizard, there are other ways for other Character Types to make use of various items in this situation. For example, a Cleric that hadn’t chosen a Subclass yet who received that Master’s Longsword +1 might suddenly decide their next Feature purchase will now be War Domain, which would then unlock the additional Martial abilities of that Magic Item card, making it worthwhile to keep and use. A great example of the synergy that can arise between Magic Items and Features. 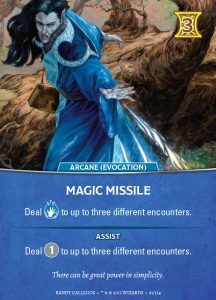 Finally, in the instance of the Mithril Chain Shirt and the Wizard, if no player is willing to trade, you simply return that item to the deck. For that Adventure, the treasure hoard simply didn’t present you with anything of use. It’s going to happen now and then.

How Powerful?
You’re wondering what a Rare card might look like, right? Or even a Very Rare? Sure, here’s the Robe of Stars. And to make full sense of it, you need to see Magic Missile Market card. Remember all those encounters throwing out tokens? Yeah…you just became the party’s best friend in those situations.

Shiny!
I mentioned audacious, right? Well, it wasn’t just in all we wanted to accomplish with the new game design. We also wanted that audacity in the look of the Magic Items as well, and so we sprinted down the road to apply a laser effect to these cards; something we’d never tackled before. And as usual, it was nice and complicated as we stumbled around trying to figure it out. But we did figure it out. Here’s a few photos straight from the printer of the final results…I think you’ll agree they look fantastic! 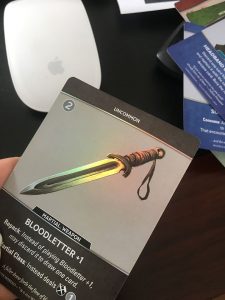 So Much More
This is one of the longest blogs I’ve written in this chain…and that’s saying something. But there’s just so much awesomeness to convey. And even then I didn’t touch on all of it by any stretch. You may have noticed a variety of new keywords on these cards: Repack, Consume, Starts & Remains in Play. Not to mention the tactics of when and where to put in Magic Items. And so on. I just couldn’t cover it all without turning this into a novella. You’ll see a series of future posts where I delve into all the great tactics that arise out of Magic Item use in your games!