It’s hard to believe we’re already here, but it’s fantastic to have the second Adventure Pack, Chaos in the Trollclaws, already on store shelves!

As with Shadows Over Dragonspear Castle, if your store jumped on the Launch Kit you may have knocked out Trollclaws already. But for the rest just seeing it now, thought I’d give a full run-down on this great new Adventure. 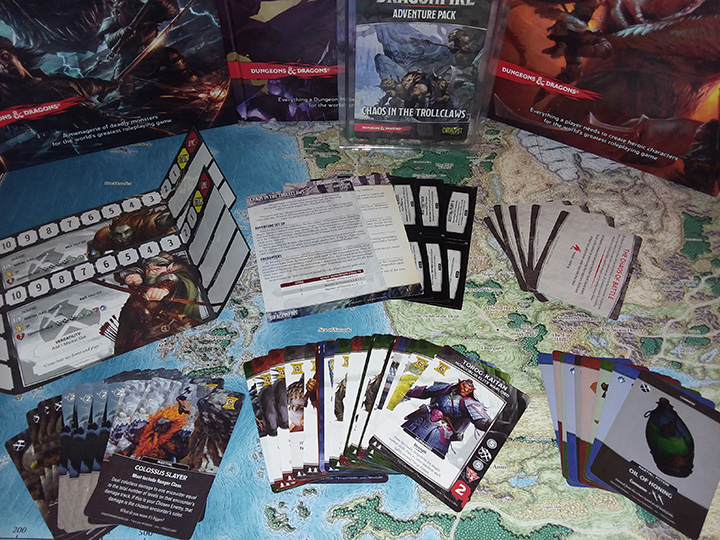 The contents of Trollclaws include:

Let’s run down the details. 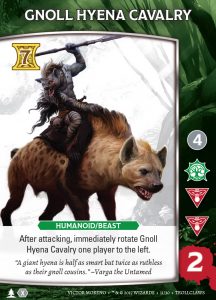 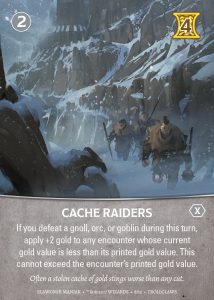 Encounters: Orcs, gnolls, and goblins are clashing in The Trollclaws, and the encounters provide great groupings of these exciting encounters: Orc Claw of Luthic to Orc Tanarukk; Gnoll Flind to Gnoll Flesh Gnawer Pack; Hobgoblin Devastator Legion to Hobgoblin Iron Shadow. We also introduce multiple cavalry encounters that are a Humanoid/Beast Type combo with a new mobile mechanic that makes them extra dangerous. Trust me, the Gnoll Hyena Cavalry are particularly brutal.

Market Cards: Every Adventure Pack will have a card unique to that Adventure, in this instance Cache Raiders. We also introduce an additional new card, Colossus Slayer, to be used when a Ranger is in the party. As with Dragonspear, additionally Glorys (with alternate art), are provided….because you’re going to need them. 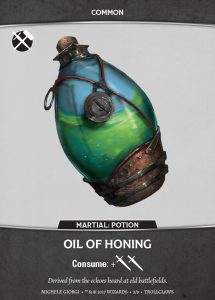 Magic Items: A few repeats continue building up a robust catalog of Magic Items, while introducing a few new ones, such as the Oil of Prescience and Oil of Honing; those two Swords on Oil of Honing come in so handy in a clinch! 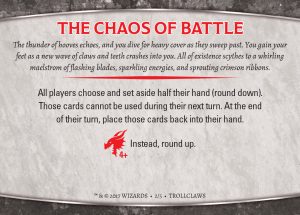 Dragonfire Cards: As I’ve previously stated, Dragonfire cards bring the pain…and the fun! What’s more, they are ridiculously fun to build and playtest. Not only can they raise fun challenges, but their name and fiction work hand-in-hand with a new mechanic to accentuate the story we’re telling. And no, I’m not going to share the Dragonfire Milestone card for this Adventure Pack.

Character Screens: The two new Character screens for Trollclaws are a Half-Elf Ranger and a Half-Orc Ranger.

Stickers: Three sheets of stickers provide additional copies of the most important Features for your Ranger.

Adventure and Rulesheet: Each Adventure Pack includes a brand-new Adventure to take full advantage of the Pack’s contents, while the Rulesheet provides additional clarifications and new fiction.