Many years ago, I had an experience of watching a game designer have a cool new thing for his game line show up, and he shrugged as though it was no biggy.

Now don’t get me wrong. I’ve talked a lot about how this is absolutely a job of too much work for too little pay and it inevitably merges your hobby with your work and your life. And for many developers, that simply becomes too much. The fun of what we do is lost in the weeds of so much minutia and emails and playtesting. And so it can be pretty difficult to maintain the perspective that despite all of that, we get to make cool stuff!

As such, when something new arrives for a line I’m working on, especially when the last six months has kicked me more than almost any time previously, my reaction is a good indication of whether this is still something I should be doing or if I’m approaching burn out. Holding the two first Adventure Packs in my hands a few weeks back…yeah, felt so good. Of course, the developer part of me had to take it apart and carefully go over it piece by piece and find one or two niggles that we need to improve. But I was just so…excited. Almost giddy. Yup…still good to go!

Some of you already have the first Adventure Pack (and depending on whether your store jumped onto the Launch Kit you might even have the second). But as it’s just becoming available this month for most players, thought I’d dive into Adventure Pack: Shadows Over Dragonspear Castle, a spread of which is shown above (D&D tabletop RPG books and map of the Sword Coast not included).

The contents of Dragonspear (which will be nearly identical from Pack to Pack) are the following:

I don’t want to give everything away, of course, but lets break that down with a little more details. 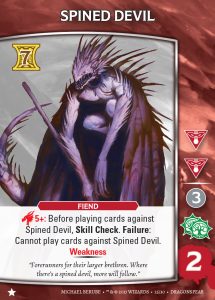 Encounters: A slew of cool new Encounters will meet your party, from Black Pudding to Blink Dog, Spirit Naga to a slew of Kobolds. Several devils also make their appearance—Bone Devil, Spined Devil, and more—as the stars of this Adventure. We also introduce a new keyword for Locations: “Trap.” Some of these cards are unique to this set. An “X” icon on a card indicates that it’s only to be used either in the set where it publishes (i.e. in this instance, Dragonspear), or when an Adventure calls for it. But most of them can be used freely, as indicated; i.e. when you’re using Dungeon Environment Decks, you can add these cards to your cards from the base game. 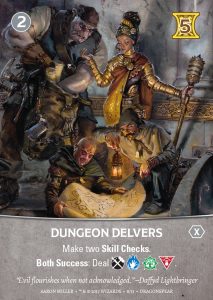 Market Cards: Every Adventure Pack will have a card unique to that Adventure; as described above, they include an X. For Dragonspear, that’s Dungeon Delver. We also introduce an additional new card, Hellish Rebuke, that can be used anytime a Warlock is in the party. Finally, because everyone will endlessly need the replenishment, additional Basic cards are included (in this instance, the Cantrip), with alternate art.

Magic Items: This includes a few repeats—making sure your Magic Item Decks are robust enough for all the draws you’ll be taking as you play more Adventures—as well as several brand new cards, like the Oil of Blessings and Oil of Proficiency. 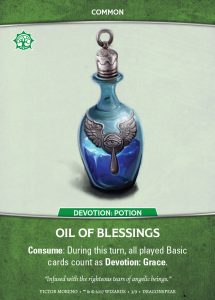 Dragonfire Cards: These are so much fun to create and to play with. Five brand new cards bring new challenges and excitement. We also introduce the concept of the Dragonfire Milestone card. After players complete Shadows Over Dragonspear Castle, one Dragonfire card must be included in all future games you play. I won’t show which one it is as it helps to evoke the flavor of this Adventure in future game play and don’t want to give anything away. You’ll just have to play it and find out! 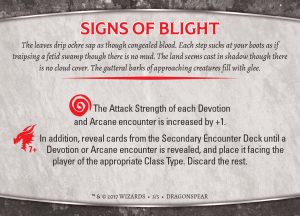 Character Screens: The two new Character screens for Dragonspear are a Lightfoot Halfing Warlock and a Moon Elf Warlock.

Stickers: The three sheets of stickers provide additional copies of the most important Fearures for your Warlock, while we also introduce the concept of a Trophy sticker.

Adventure and Rulesheet: Every Adventure Pack, of course, includes a brand-new Adventure, customized to take full advantage of the Pack’s contents. The Rulesheet, then, provides additional clarifications, as well as new fiction that ties back into the An Ancient Evil Arises campaign from the base game. I won’t go into any more details than that, as I don’t want to spoil anything for you.

Most months in the coming year will include one of these great Adventure Packs. Grab one and see how much more excitement you can add to your adventuring!