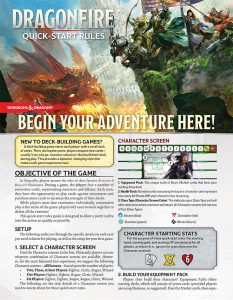 The base Dragonfire game is wonderfully fun. And I see a lot of players getting it out and diving into a pile of one-off games. However, like the tabletop RPG, Dragonfire is so much more when you play the same character across numerous Adventures, gaining Experience Points and trading that XP in for Features (stickers) to reflect the leveling up of your character’s capabilities.

To help players start off on that path more quickly, Dragonfire has a quick-start rules booklet. And within it is the Adventure The Village is Attacked: A Hero Is Born. A nice, straightforward way to dive into the game. Note that at this time you haven’t selected a permanent character yet. Why would we force that on you when you’ve barely played the game or grasped the nuances of the various Class Types and how they play just yet? However, at the end of the Adventure, while players are free to play the game as they see fit, we suggest that each player settle on a character and grab that Character screen. The player then selects from one of twelve different Background Features that they’ll apply to their Character screen.

Take a look at the Sailor, Soldier and Street Urchin Background Features. You’ll note each of these is a once-a-game effect. It’s not a big boost at all. But it’s just enough to let you select the type of story—and its accompanying game mechanic—you want to embrace (all the Background names are straight out of the tabletop RPG Player’s Handbook). And once again, you’ve got the QSR under your belt, so you know enough that these abilities aren’t intimidating, but should be exciting to put to the test in your next game. 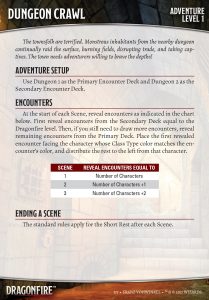 While you can play the QSR several times—it is a fun Adventure—you can also immediately move onto the full rules and the Dungeon Crawl Adventure. There’s a total of seven different Adventures in the base game—yup, seven! But for the first few sessions, I imagine most players will get their chops in playing the Dungeon Crawl.

In Dragonfire, each Adventure is divided into a number of Scenes that block out how you’ll play through the challenges. And without exception, if you start a Scene, you will earn XP. If you remember all the way back to some of my first posts, I discussed that despite Shadowrun: Crossfire’s awesome play, it had some downsides. And one of those was how stingy it could be on handing out the points players needed to advance. But don’t think this is a walk in the king’s park. Dragonfire will be plenty challenging. But we more readily reward players for diving into a game. 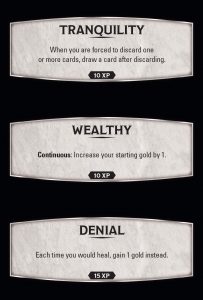 For instance, in the Dungeon Crawl each player will receive 1 XP for starting each of three Scenes, and then, if you complete the game, you’ll receive a bonus 2 XP each, for a total of 5 XP. So if you’re either lucky or just that good out of the gate, there are 5 XP Features available, and you could immediately upgrade a sticker. For most, however, you’ll likely put in two to four games before upgrading the first time.

There’s a large selection (and multiple copies) of generic Features, meaning any Class Type can use them. For example, here’s two 10 XP and one 15 XP Feature to start to show you the ways in which you can quickly customize your play style. That’s all very similar to what we did with Shadowrun: Crossfire. However, here’s where we start to diverge and embrace Dungeons & Dragons.

First, you’ve got Character Class/Class Type Features. As you can see from the Features at right, they specifically tell you which Character Class or Class Type you must be to use a Feature (provided you’ve earned the XP to nab it, of course). For example, Turn Undead and Second Wind require a specific Character Class; i.e. Cleric or Paladin for Turn Undead or Fighter for Second Wind. Meanwhile Expertise and Arcane Recovery are Class Type, meaning a Rogue or Bard could take Expertise, while a Wizard, Warlock or Sorcerer could take Arcane Recovery.

Second, but wait, there’s more! You don’t just have Character Classes, you have Subclasses in the tabletop RPG, and we’ve fully embraced that in Dragonfire. For example, take a look at Life Domain. That appears to be just another Character Class specific Feature. However, this is a primary Subclass Feature. Look at Disciples of Life or Divine Strike. You’ll notice both of those require that you are both a Cleric—i.e. you must have the correct type of Character screen—and that you also have the Life Domain Feature active on your Character screen; i.e. you can’t ever cover it up or you lose the ability to use the Subclass Features.

And just because I’m sure some of you are already wondering about it…in the base game, the highest XP stickers are 100. And how powerful are they? Well, if you haven’t really played the game yet, it’ll be difficult to discern why some of them could be good. But take a look at Survivor. That’s a nice, easy-to-understand Feature, even with just the bits I’ve explained about the game to date. (And yes…that’s potentially dozens and dozens of games across months…ah, the campaign stories you’ll have to tell by then!)

And for the other question that might be popping up, there are two hundred and four Features in Dragonfire, with almost one hundred and fifty unique Features! Not to mention over a hundred more Features in the Heroes of the Sword Coast character pack to go along with the Bard, Druid, Ranger, and Warlock Character Classes introduced there.

Hopefully you’re starting to see the sheer depth of play and customizing that’ll be at your fingertips!